We hadn’t planned to do a boardgame today but the Pope rang up (OK, it was the chap who’s playing the role of the Pope in our “Here I Stand” Vassal game) to say he was free and was there any chance of a 3 player game? A quick look at my shelves revealed “Andean Abyss” and as Kevin had pre-ordered the Afghanistan game in the same COIN series it was an easy choice to agree on. In the 3-player game, one player has to control the AOC right-wing faction and the Cartel drug gangs faction (and achieve both victory conditions at the same time for an auto-victory) whilst one player controls the Government forces and the last player the left-wing FARC guerilla faction. We rolled for who got what and I was the FARC – probably the easiest to play in the 3-player game as a combination of bases and influence would give me victory.

The key mechanic of the game is that, though it is card driven, the players don’t hold any cards in their hand, but the top card of the deck is revealed along with the card which is coming up next. Each card has the order the players may use it printed on it, and because if you play an action on the current card you miss out on the chance to play on the next card, this leads to some difficult choices – it’s an interesting twist, but because I wasn’t holding any cards I felt the game was driving me rather than the other way round. Into each quarter of the deck a “Propaganda” card (think scoring card from Twilight Struggle) is inserted, then each quarter of the deck is shuffled separately and combined into a deck – this way, you know a scoring card is coming, just not exactly when. Oddly enough, the scoring card was the last possible card out of the first quarter of the deck AND the second quarter of the deck so accusations about the quality of my shuffling and general trustworthiness were being bandied about – ironically, mostly by the Cartel and fascist bully-boy player 🙂

We played through the first quarter of the deck concentrating on getting towards our own victory conditions and not really interfering with each other unless a card event came up which seemed too detrimental to the other factions not to play. In a way, this was the Government’s downfall as Nick played events rather than building up his forces when he probably should have been (especially the Police) to stop the FARC holding on to political control of so many areas.

The battle for Bogota

By the end of the second quarter of the deck, the Cartels were swimming in cash and had easily achieved their objective of placing bases, but the AOC weren’t even close. The Government forces had cleared out all my bases and guerillas from the province of Huila-Tolima but hadn’t yet managed to  switch its allegiance to pro-Government – important in the scoring phase which we all knew was coming within a card or two. Life is cheap in the FARC, so knowing I would lose the guerillas I launched an all-out assault on Bogota which the government cannot afford to lose as it is worth so many victory points. Responding to this assault, the Government sent in just enough troops to wipe me out, but not before my 2 remaining guerillas got a chance to fight back. Needing a 1 or 2 on a D6 to kill some Government forces and force them to take two action phases to wipe me out rather than one and swing control of the province with the other, I rolled  a ‘1’. I had also placed a base, and because the Government were prevented from taking an action on the next card and the card after was “Propaganda”  this ended the game as the FARC had enough bases and political influence to win. The Cartel were rolling in drugs money but the AOC had not been able to destroy any FARC bases and place enough of their own to outnumber FARC (their only objective).

I wish I could say I’d planned the ending, but I’d be lying – I was probably playing the least difficult side in the 3-player version and it was our lack of interfering with each other’s plans which gave me victory. I really want to like this game, but I honestly didn’t really feel like I was immersed in the theme of running Marxist guerillas, just gaining area control with cubes and discs whilst gathering and spending resources and as an afterthought making sure no-one else was achieving their victory conditions. The game seems very abstract – there is little actual dice-rolling or combat unlike Labyrinth by the same designer, though that is 2-player and cards in-hand so you feel that you are playing against someone and not just the game system. It was an OK choice as there were 3 of us wanting to play a game – a once every couple of years event – but I enjoyed our last 3-player outing of Here I Stand a lot more.

At the start of turn 4, the Reb fort fired at the ailing Switzerland – 6 hits took her down to 1 hit point and a critical hit destroyed the boiler so she couldn’t move anymore either. Also, as she was below one third of her starting hit points, the ship counted as “battered” so was less effective at firing, could only move 1 hex (if the ship still had a boiler!) and needed to take a morale test when activated which, if failed would force her to strike her colours and surrender. 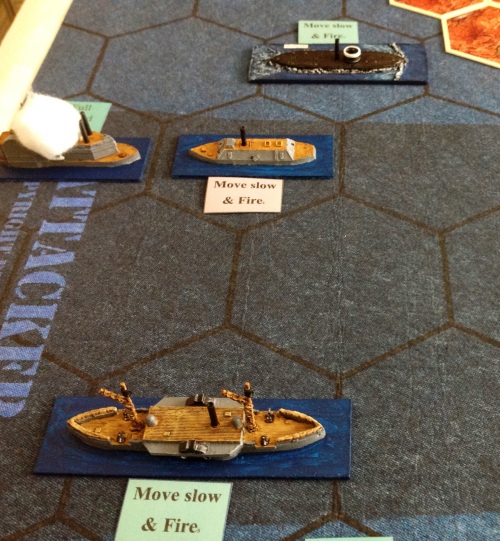 With the edge of the board fast approaching CSS Arkansas needed to start turning, so with her starboard gun destroyed only her rear battery was able to fire – USS Sassacus took 3 hits from her but crucially was set on fire by the shots. USS Passaic attempted to negotiate a sandbar and succeeded (not really that risky as she had a shallow draught) and because Arkansas would be out of the battle for a while, shot at CSS Hampton before she could sink USS Switzerland – 5 hits and a critical resulted in another fire. CSS Hampton now had to tackle the fire on board before activating and luckily succeeded in putting the fire out before further damage was caused – her rear medium gun then sank the Switzerland while the front gun missed the Sassacus. END_OF_DOCUMENT_TOKEN_TO_BE_REPLACED

I’ve been on the verge of putting my ACW Naval ships into a Bring & Buy for a while now, but thought I’d give them one last chance with Peter Pig’s new(ish) edition of “Hammerin’ Iron” which I saw demo-ed at Salute a couple of years back. I’ve used a couple of different rule sets with these ships but can’t admit to any of them ever being much fun. 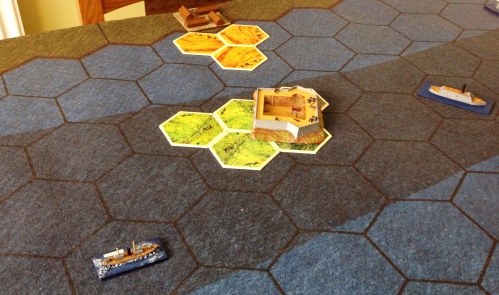 There is a comprehensive scenario generator included with the rules, but briefly there are 2 islands and 2 sandbars to be placed along with 2 objectives for the attacker to destroy (transports on the river and buildings on the shore) and a fort for the defender to use. However, the fort position is generated by the roll of 2D6 to determine which row of hexes it is placed – in this game I rolled an 8 which was the row an island was on so the fort was able to go there – this would make it even tougher for the Union as they would be under the fort’s guns from the very start. In this scenario, the attacker gets to place 3 ships (2 chosen by him, 1 by the defender) on the table, with 1 more ship arriving in turns 2 and 3 and a third ship possibly arriving on a dice roll. The defender gets 2 ships on the board at the start  (one chosen by him, one by the attacker) in a board row diced for by 2D6 but with no automatic arrivals for the rest of his fleet – he has to roll each turn, needing 9+ on 2D6 for a ship of his choice to arrive (or if he has to re-roll one of the D6 to achieve the 9, only a tinclad or wooden ship of less than 25 hit points can arrive). Also the defender has to lose one ship randomly from his force of 6 ships, but luckily for the Confederacy the random roll was for CSS Drewry (one of the 2 small gunboats) to stay at home. END_OF_DOCUMENT_TOKEN_TO_BE_REPLACED

Board Game Reviews, Reports, and Reflections.

Musings from the warp

Queegs home for modelling and painting projects, wargaming and whimsy

The journal of a free wargames rules designer

by The Ministry of Gentlemanly Warfare

Miniature painting and gaming from under the stairs

This War without an Enemy

A game designer's view of gaming

The Third Incarnation of the Point of Singularity

I play for fun... all else I take seriously